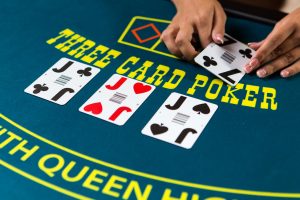 Three card poker was developed in 1994 by Derek Webb and his intention was to create a card game that had the excitement of poker and the speed of a casino game.  The rules were easy, the payouts were large and the house edge was such that casinos would want to have the game being played in their casinos.  Three card poker also goes under the names poker three, trey poker and tri poker.  Three card poker is two games in one and is played with a single deck of cards.

How to Play Three Card Poker

Each player has three circles in front of them.  The top circle is the pair plus where bets are placed for the pair plus game.  The two circles under it are the ante and play.  The game starts off with players placing a bet on the ante and or pair plus.  The bet will be equal to the minimum of the table.  After each player has made a bet each player is dealt three cards.  The dealer will begin with the player at the left corner of the table and deal clockwise.  The dealer also receives three cards.

Players can look at their cards and decide to play or fold.  Players who fold will lose the ante bet.  If the player continues an additional bet must be placed and must be the same as the bet on the table.

Once all players have looked at their hands and made a decision the dealer will show his cards.  A queen or better means that the dealer will qualify, but if the dealer does not then those players who are still in the game will receive their play bet back and money from their ante bet.

An ante bonus is paid out when players have a three of a kind, straight flush or a straight.  This bonus is paid out even if the dealer has a higher value hand.  No extra bets need to be placed and the amount will depend on the paytable of the table being played at.

Three card poker is a popular game mainly because it is easy to play, but exciting as players are playing against the dealer and not each other.