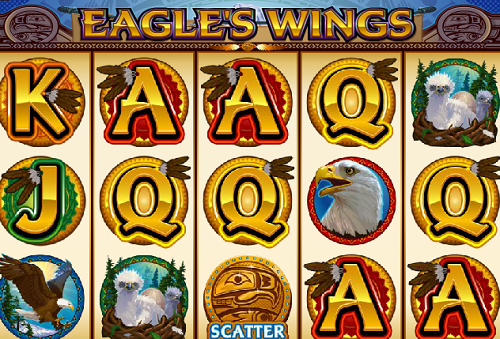 A majestic eagle in flight is the animated clip that sets the stage for Eagles Wings, a five reel, 25 payline online slots game. This Microgaming title features all the action of slot reels, and much more besides.

Among this game’s special features are scatter and stacked wild symbols, a free spins bonus round, and an autoplay feature. It also boasts animated clips and reel symbols.

Symbols on the Reels

Strongly focused on the eagle and the salmon, both powerful creatures in their own right, the nature-themed Eagles Wings also hints at Native American culture.

This is especially evident on the reels of this online slots game, where the symbols portray an eagle in flight, a perched eagle, an eagle’s nest, a salmon, a coin depicting eagles and salmon, the game logo, and high value playing card symbols.

Eagles Wings is a graphics-rich video slot that boasts not only superb graphics, but mesmerising animated clips, the first of which is the opening clip of an eagle soaring over the countryside.

Other animations in the game include salmon leaping out of water, and an eagle catching salmon from a lake. The game is played against a backdrop of a snowy peak, and its focus on nature is further enhanced by a soothing soundtrack and sounds of the wild.

The scatter symbol in Eagles Wings online slots is the coin. If three or more of these appear on the reels, they will unlock the game’s free spins bonus round.

Before this round begins, however, players need to choose a coin to discover how many free spins they will receive. This round could see players playing with as many as 60 free spins, along with a 3x multiplier on winnings made in this round. If more scatter symbols appear on the reels, the free spins bonus round could be re-activated.

The Eagles Wings’ logo reel symbol is slot game’s wild symbol. The logo can act as a substitute for all other symbols except the coin scatter symbol.

This means the wild symbol can help complete winning combinations and even double those payouts. Also, this is a stacked wild symbol on reels two and three, so three or more of these symbols appearing on those reels could boost payouts.

A feature found in Eagles Wings online slots that is not explicitly linked to this title is the Autoplay feature. This feature allows players to determine how the game should play itself.

Among the settings that players can change are the number of spins, the time between spins, as well as various settings that control when the game stops playing itself, such as after a win, or if credits decrease or increase to a certain amount.

Players do not need to wait for an Autoplay session to play itself out. If they wish to resume control of the game, all they need to do is turn off the feature.

In addition to the regular bet options, Spin button, and Autoplay feature, Eagles Wings like many other casino slots available to be played online, also has Quick Spin and Bet Max features.

The Quick Spin feature decreases the number of times the reels spin, so rounds are played faster. The Bet Max button is an easy way for players to place this online slots game’s maximum bet and activate all paylines.