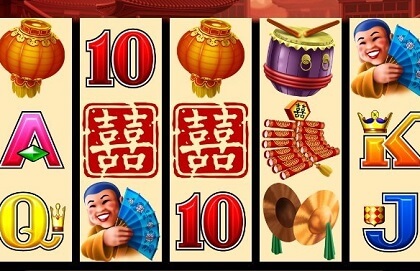 The Double Happiness slot game is created by Aristocrat Games. It features a bright, colourful design based around popular Chinese culture. Including Chinese dragons, paper lanterns, fans, and more, there is little that can be said to be unappealing about the graphics and deigns choices.

The sound design, on the other hand, is sorely lacking, with nothing but the most basic audio on offer, such as slicking reels and one note chimes. This is a little disappointing, given that the Double Happiness Slot game could have been a real classic, if accompanied by a strong soundtrack. The game is, however, still enjoyable, and many hours of entertainment can be found if a player is perhaps looking for a bit of peace and quiet, as apposed to any sort of music.

The terms of game play the Double Happiness slot game features a five reel, twenty five line play system, with betting lines able to be manually adjusted by the player. This will be a welcome sight for veteran slot game players, many of whom prefer a bit of added strategy features.

The most valuable symbol in the Double Happiness slot game is the smiling dancer with a paper fan, who seems to be a monk. If matching with himself the maximum of five times this smiling person will certainly make you want to smile back, given that the payout is a healthy sum. He is also the only symbol that will give a payout if matched only twice, even if it is only an insignificant amount. The next most valuable symbol is the drums, followed fireworks, paper lantern, and symbols.

The remaining symbols in the game are the traditional nine, ten, jack, queen, king and ace, which certainly don’t have much to do with Chinese culture. It is a bit of a shame that the developers did not take the time to make more appropriate lower value symbols, or at least put some effort into making the card numbers Chinese themed in some way.

When a game features a Chinese theme, you can be sure that there are going to be some dragons, and the Double Happiness slot game is no exception. The Chinese dragon in this case is the wild symbol, and will match with any other symbol to creating a matching sequence. The wild symbol will also match with itself, however, up to five times, and if you didn’t think the dragon was lucky before, wait until you see how much he pays out for a five time match.

A second Chinese dragon, featuring different colours is the scatter symbol, and will match up to three times, even if not in adjacent spaces on the reels. Upon matching the scatter symbols will grant thirty free spins. Plus, extra wilds will be added to the reels during the free spins sequence, greatly increasing the chances of matches being created. The last bonus feature in the Double Happiness slot game is the gamble option, seen near the bottom of the play area. Hit this button after a win to get a chance at doubling the win, or losing it altogether. This feature can also be discovered in many pokies at https://onlinecasinogames.co.nz/pokies.