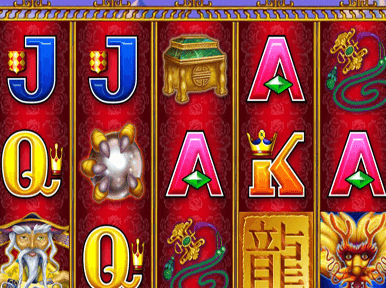 Dragon Emperor, created by Aristocrat Gaming, is an online slot game. It features a strikingly beautiful visual theme based around popular Chinese culture, with a special focus on past eras where wise old Emperors ruled the lands.

The historic visuals are depicted in a serious of symbols designs that are both highly detailed and interesting, making the game appealing to players from all walks of life. If anything, a person will get a glimpse into a culture that is fascinating and rich.

In terms of game play Dragon Emperor uses a fairly standard five reel system, but take note that play lines are not adjustable in any way. Instead the game uses a betting line system referred to as Reel Power, which offer two hundred and forty three ways to win. This does indeed sound like an impressively large number, but be aware that with the player having no way in which to decide the number of reels, a great deal of interactivity and freedom is taken away. Veteran slot game players may find this system unappealing but new players will love being able to play this slots game from their smart phone.

The image of a wise emperor with a long white moustache and flowing beard is a common one, and hence many people will instantly recognise the most valuable symbol in the Dragon Emperor slot game. The emperor symbol is the most valuable, and pays out an enormous sum if matched the maximum of five times.

The second most valuable symbol is likewise recognisable, depicting a dragons claw clutching a pearl.

The remaining picture symbol is a golden chest, which is the least valuable of the three, but still grants a considerable payout if matched five times. The remaining symbols are rather disappointingly designed card numbers, including jack, queen, king and ace. No effort was even made to have these card numbers fit with the theme, which is a bit of let down, given as how detailed the other symbols are. Lets turn out attention now to the bonus symbols, which hold the key to great riches for the player.

There are two bonus symbols in the Dragon Emperor game, including the dragon and the golden Chinese character. The dragon, seen as a lucky omen in Chinese culture, works in conjunction with the other bonus symbol, with the two granting the potential for enormous payouts. The golden Chinese character grants free spins when matched, which will be triggered automatically. The number of free spins is determined by the value of the matching sequence. During the free spins, if the dragon symbol is matched anywhere on the reels, an instant extra spin is granted, on top of those already existing. This means that multiple chances to achieve winning sequences are granted, all of which likewise use the dragon as a wild symbol.

Also note that during free spins, if the golden character symbols match again, the free spins sequence will be retriggered from the start. The potential for incredible payouts is clear, making the Dragon Emperor game one of the more interesting the in the special features department.